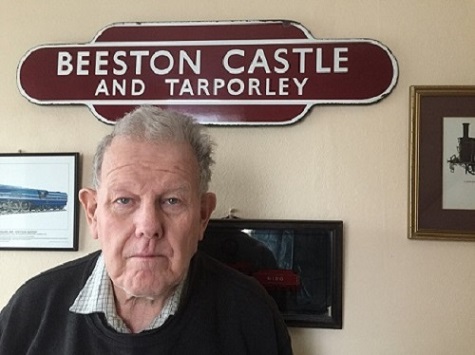 This week I had the pleasure of meeting local resident and rail enthusiast Richard Bass pictured under the original Tarporley Railway Station sign which he purchased after the station had closed.

Richard is delighted we are trying to re-open the Station and fully endorses our campaign.

He remembers when the station was a busy hub and you could get a direct train to London Euston.

Our campaign gathers steam ! We now have over 650 signatures. We have a team of more than 30 volunteers and we are setting up a Steering Group. We've had some excellent media coverage in The Chester Chronicle HERE , Tarporley News HERE and Tarporley Talk HERE.

If we were to succeed it would certainly be a step in the right direction to reduce traffic on the roads, improve access to Chester and Crewe and be in a position to take advantage of Hs2 if and when it happens. It will also help with emissions, be a safer and quicker way of travelling and reduce the chronic parking problems at Tarporley and neighbouring towns and villages.

To succeed we need to carefully and consistently raise awareness of the need to re-open the Station and with over 650 signatories on the website petition already we are certainly heading in the right direction. However we have a lot further to go if we are to get Cheshire West and Chester Council to sit up and take notice. We need to get beyond 1000 at least, representing a good proportion of residents in Tarporley and neighbouring areas.

You can find my petition HERE .