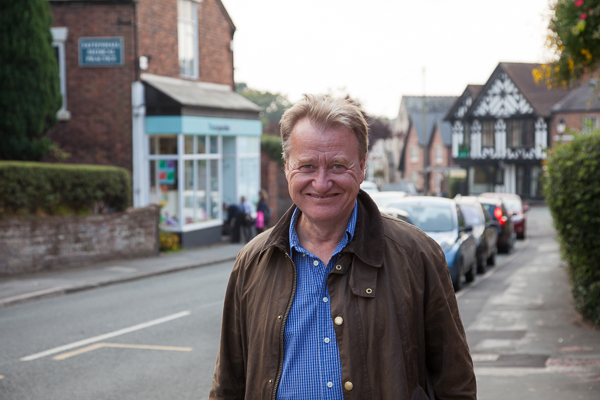 Ian was born and brought up in Cheshire where he lives with his wife Jenny and daughter Victoria near Tarporley in the heart of the Eddisbury constituency. His family has farmed in Cheshire for over 400 years. His father worked in agricultural development in East and Central Africa, helping shape Ian's values of the importance of community and service.

After a career in the oil and gas industry around the world, Ian returned to Cheshire where he was a Director of United Utilities for six years and has served on the Boards of Walton Hospital in Liverpool and medical software company Ascribe plc. He is currently a non-executive director of a north-west renewable energy company.

In the period since the 2015 election, Ian has been an active and successful campaigner locally championing a number of local causes including:

Improving Footpaths and Rights of Way.

His passion is to protect the beautiful towns and villages of Eddisbury from indiscriminate development, support employment opportunity and health access for all; and ensure our children have the best possible education.

Ian is the kind of person local people want to stand up for them in Parliament. His energy and enthusiasm speak volumes but his proven ability to get things done is what sets him apart.

'Developing our communities means putting residents first, not developers. Access to services such as doctors, school places and rural transport and communications needs must be built in early not left to be dealt with later. We need to ensure we strike the right balance between growth and jobs, people and the environment.'

'I have experienced first hand the excellence of our health service, both as a Director of a leading hospital in the North West, and as a user for myself and my family.'

Ian has degrees in law, international relations and a Masters in development economics. He is a keen cyclist and walker and has visited nearly every European country on his bike, including the former Eastern bloc states, over the last forty years.

'Witnessing at first hand the birth of the new European democracies and their rapid development has been fascinating. They greatly value the UK and the continuing importance of our leading role in Europe. We should be proud of our part in helping build bulwarks of democracy, prosperity and peace against all too real threats from outside the EU.'